Emily O’Brien, a professional Recorder player from the Boston area, will perform three compositions by African-American composer Melika Fitzhugh: "Respiravisse in Perpetuo" was written for the Mollenhauer Helder modern tenor, commissioned for her album “Fantasies for a Modern Recorder”. It employs a breathing mantra as an expressive device, and explores the expanded range and dynamic possibilities of the modern recorder. “The past is just a story we tell ourselves” was composed this year, and is unusual in being an unaccompanied piece for the great bass recorder - a size more commonly found in ensemble settings. Her third piece, “Oracle” will be accompanied by a professional string quartet.  It combines ideas of a chant or recitative found in earlier styles with more modern rhythmic textures and meter.

About Emily O’Brien
Emily O’Brien is a native of Washington, DC where she played recorder from a young age. She studied recorder and french horn at Boston University, and recorder and Baroque flute at the Hochschule für Musik in Karlsruhe, Germany. She performs in recorder ensembles and historical chamber music, as well as English Country Dance bands. She has recorded a variety of repertoire but with a particular focus on exploring the wide range of possibilities offered by the Helder Harmonic tenor recorder. As a teacher, she works with private students and ensembles in the Boston area as well as teaching at various summer workshop such as CDSS’s Early Music Week at Pinewoods and Amherst Early Music Festival. During the pandemic, Emily has recorded many multi-track videos and solo pieces, some of which may be found via her YouTube channel. In her spare time, she enjoys long distance cycling.

Contact Person:
Julienne Pape
Outlook/ vCalendar/ Google:
Click on the icon next to the date(s) to add to your calendar:
6/26/2022

Email Reminder:
click here to setup an email reminder for this event 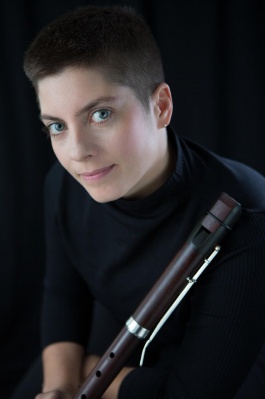